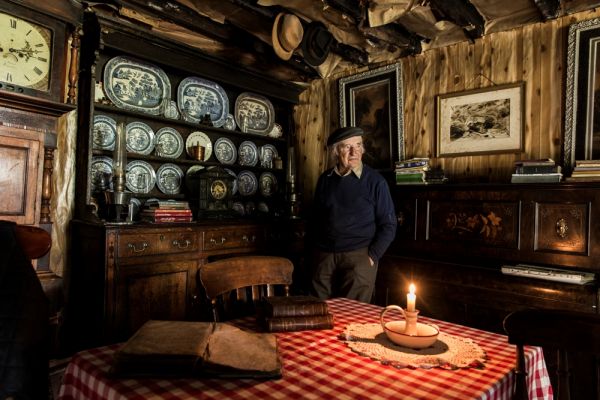 The farmer and custodian of Yr Ysgwrn, Mr Gerald Williams, passed away on the 11th of June 2021.

Gerald Williams was born in Yr Ysgwrn, Trawsfynydd, in 1929, the son of Ivor and Ann Williams, one of the younger siblings of poet, Ellis Humphrey Evans, Hedd Wyn. Gerald was the second of their four children and following the death of their Mother, Gerald and his late older brother, Ellis, were brought up at Yr Ysgwrn by their grandparents. Gerald was educated at Trawsfynydd and Blaenau Ffestiniog before returning home to Yr Ysgwrn to help his grandfather and uncles on the farm. He spent his life farming Yr Ysgwrn and together with Ellis, honoured a promise they made to their grandmother, “to keep the door open” to pilgrims visiting Yr Ysgwrn to pay tribute to Hedd Wyn.

Thanks to the tireless work undertaken by Gerald and his family, the Welsh national memory of Hedd Wyn and the generation of Welsh youth lost during the First World War was kept alive. Yr Ysgwrn is a peaceful, cultural  memorial, a true tribute to the outstanding work accomplished by Gerald and his family. Gerald’s unique character, sharp wit and wonderful ability to communicate with visitors of all ages and backgrounds created a truly unique visitor experience at Yr Ysgwrn. He took delight in the company of people and was overjoyed by the interest that children and young people universally demonstrated in his uncle’s story.

The sale of the farm to Snowdonia National Park Authority brought major changes and developments at Yr Ysgwrn between 2012 and 2017. Gerald was a key part of the project, keeping a close eye on all aspects of the work, offering insightful advice and ensuring that the farmhouse’s unique atmosphere was preserved. Indeed, his motto was “a home, not a museum” and as an Authority, we were fortunate of Gerald’s assistance and willing support throughout the years.

Gerald was honoured for his life’s work in 2013, when he received the MBE on the threshold of Yr Ysgwrn itself. In 2018, he received the First Minister’s Special Award at the Welsh Government’s St David Awards for his service at Yr Ysgwrn.

Gerald Williams made a unique contribution to Welsh culture and it was a privilege to call him a friend. We send our sincere condolences to his wife Elsa, his sister Malo and the entire family in their sad loss.

Head of Cultural Heritage for the Snowdonia National Park Authority