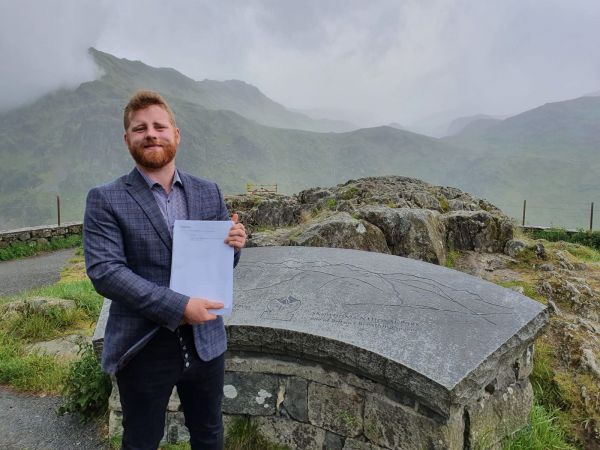 Elfed Wyn ap Elwyn presented a petition with over 5,000 signatures from around the world to the Snowdonia National Park Authority Chairman.

At the Authority meeting on the 18th of April the following motion was considered:

“’That the Authority hereafter uses only the Authority’s Welsh name for the Authority and that this becomes relevant in any language i.e. ”Parc Cenedlaethol Eryri” and never uses ”Snowdonia National Park” again. The same should apply to ”Yr Wyddfa” – never to use the name ”Snowdon” for it again.”

The Authority Members decided there was no need to consider the motion as a Welsh Place Names Task and Finish Group has already been appointed following earlier considerations that recommended establishing and adopting guidelines on the use of place names by the National Park Authority.

Following the Authority meeting the matter received substantial media and public attention with strong feelings and different perspectives being voiced.

Once the Summer is over the task and finish group will develop a policy framework to enable the SNPA to protect and standardize the use of place names in the Snowdonia National Park by the Authority. They will also raise awareness within different local and international audiences of the importance of place names in Eryri and as a source which strengthens connections with the environment, history and heritage of the area.

“Attacks on the Welsh language is something consistent, this is seen when house names and names for different areas of Wales are changed from Welsh. I, and many others think that only using the names ‘Eryri’ and ‘Yr Wyddfa’ would be a positive step towards showing the importance of the Welsh language”.

“The Snowdonia National Park Authority is committed to protect and promote the use of native place names for every day use and for future generations. One of the aims of the Task and Finish Group will be to note how success on the use of these place names are measured. The vibrancy of the Welsh language is one of Eryri’s special qualities and we are passionate about respecting and protecting our communities, our language and our culture.”