Discover
Discover
Snowdonia's endless landscape is home to a wealth of treasures to discover and enjoy.
Discover
Landscapes and Wildlife
History and Heritage
Culture, Language and Community
Events
Eryri Podcast
Protect
Protect
We can all play a part in protecting Snowdonia for generations to come.
Protect
Challenges
Conservation Work
Volunteer
National Park Wardens
Young Rangers Scheme
Eryri Ambassador Scheme
Visit
Visit
Get the most out of your visit to Snowdonia by planning ahead
Visit
Plan your Visit
Yr Wyddfa (Snowdon)
Llyn Tegid
Walks and Routes
Access for all
Plas Tan y Bwlch
Shop
Map

Discover Protect Visit Shop
Language
Park Authority Planning & Development
Discover
Snowdonia's endless landscape is home to a wealth of treasures to discover and enjoy.
Discover
Landscapes and Wildlife History and Heritage Culture, Language and Community Events Eryri Podcast
Protect
We can all play a part in protecting Snowdonia for generations to come.
Protect
Challenges Conservation Work Volunteer National Park Wardens Young Rangers Scheme Eryri Ambassador Scheme
Visit
Get the most out of your visit to Snowdonia by planning ahead
Visit
Plan your Visit Yr Wyddfa (Snowdon) Llyn Tegid Walks and Routes Access for all Plas Tan y Bwlch
Dewiswch eich iaith
Please select your language preference
Hoffwn weld y wefan yn Gymraeg
Parhau yn y Gymraeg
Gallwch newid iaith unrhyw bryd
I would like to view the website in English
Continue in English
You can switch language anytime
results for result for
Sorry - no results were found for
Try one of our suggested links below: 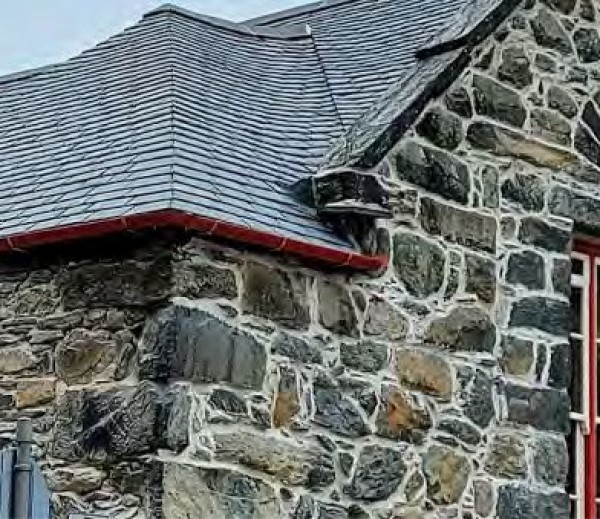 The renovation of a 17th Century listed building in Dolgellau, Y Sosban, which incorporated some “rare” roofing methods using Welsh Slate, has won a national award.

Greenough & Sons roofing contractors, who are based on the Isle of Anglesey, were named the winners out of seven specialist sub-contractors shortlisted for the “Best use of a roof tile for a heritage roof,” category of the 2020 Pitched Roofing Awards.

Their 10-week work on the Grade II listed Y Sosban cafe in Dolgellau town centre involved the use of mitred hips and “single-cut” swept valleys which were once traditional to the immediate area but are now extremely rare to see.

The project also featured the use of Welsh Slate’s Cwt Y Bugail blue grey slates in random, diminishing courses to replicate the coursing of the original roof, which had been coated with bitumen and subject to various unsuccessful localised repair attempts.

The renovation was part of the Dolgellau Townscape Heritage project, funded by the Snowdonia National Park Authority, the National Lottery Heritage Fund and Cadw, which had identified the building as one of three “High priority buildings” needing attention in the town.

“The original roof was a random diminishing-course slate roof with regional detailing including mitred hips and slated Welsh valleys. The design team worked together to reach a solution, where large slates were used on the lower pitch, with an increased head-lap that provided both an improved solution against wind-driven rain but also replicated the former appearance.”

“The slate valleys, having no lead or any form of flashing, are an extremely difficult detail to get right, and only the most experienced slaters with local knowledge of their construction would be able to carry out these features to maintain the look, and just as importantly, keep the rain out.”

“The random Cwt Y Bugail slates were the perfect match for authenticity. The best-quality slates gave the slaters confidence in the material they were using and provided the client with a product of unrivalled durability.”

“The building’s renovation has been a huge success, and for the roofing contractors to win this national award is testament to all the research, hard work and skill that’s been used by everyone involved on the project.”

As well as the roof, the rest of the property was also renovated, including re-pointing with hot-lime mortar, repairing windows, installing cast-iron rainwater goods, introducing a consistent scheme of signage and public realm works around the perimeter of the building.

The winners of the 2020 Pitched Roofing Awards were announced in a virtual ceremony on Friday 26th February 2021.